a taiko group that collaborates traditional Japanese taiko and jazz music and provides a unique harmony of the East and the West, a new revolution of the taiko entertainment!
Hiro Hayashida, leader of ZI-PANG, has done numerous collaborative sessions with all sorts of musicians ever since he became a solo taiko player.  Hayashida is known for his incredible technique and unique personality as well as for his ability as a composer and a producer.  He’s one of the very few taiko players who brought in the concept of “music” in the Japanese taiko world.  It should especially be noted that Hayashida is probably the only taiko player who can produce taiko ensembles in the category of music. He started a Taiko Jazz “ZI-PANG” in 2000 to search for new possibilities of taiko and to thoroughly demonstrate his experience and technique.

He gathered unique taiko players and values each player’s extraordinary ability and technique and has also done collaborations with sax and trombone players.  With its overwhelming technique, harmony and energetic and groovy play, ZI-PANG creates a new, unique entertainment world with taiko, totally different from other taiko groups.
He released the first live video in 2003, attended the award ceremony of the Japanese Academy Award in 2004.  In 2005, ZI-PANG took a one-month tour in Central and South America for a month and was very well received.  They were invited to play during the Japan Week at the Expo 2005 in Aichi, Japan and was described as “the challenge and the result of Hayashida and ZI-PANG will definitely be an important index of the trend of oke-daiko.” 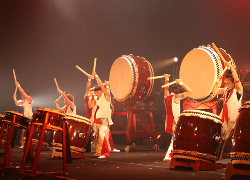 Hayashida has also been aggressively providing opportunities to get to know and play the taiko to people in Japan as well as other parts of the world by holding concerts and workshops.  He is also interested in providing cultural activities and gives workshops at schools, which is rather rare for Japan. 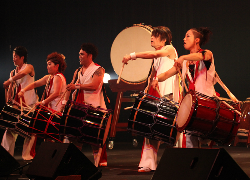